HISTORY OF JEWS IN WICHITA 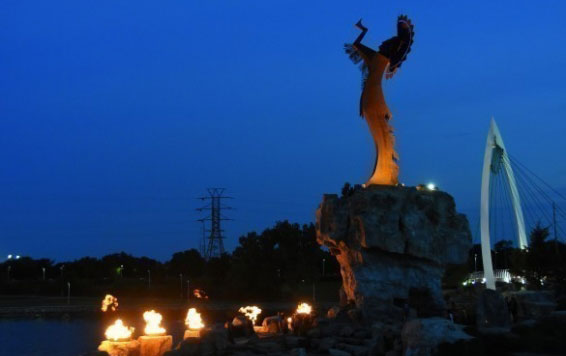 Jews have been part of the Wichita story from its earliest days, going back to the days of Leopold Hays, who settled in Wichita in 1869 as a trader in buffalo hides and later as the owner of a livery and saddle business. In the tradition of Jewish merchants worldwide, he welcomed strangers and cleared his counters each night so they could be used as beds for cowboys.

Most of the original Jewish families were of German and Austrian origin, arriving with the great cattle boom between 1860 and 1880. Among them were Sol and Morris Kohn, who helped recruit the railroad and cattle industry to the area. Sol was a signer of the town charter in 1868 and in 1879 became the first—but not the last—Jewish mayor of Wichita. In the late 1870’s, Wichita’s most important downtown hub was at the intersection of Douglas and Main. Three of the four businesses on that intersection had Jewish owners. Holy Emanu-El (later re-named Congregation Emanu-El) organized in 1885 as a Reform congregation, largely to serve the spiritual needs of the area’s roughly 30 Jewish families.

In the turn of the century, Wichita witnessed the arrival of a new Jewish population from Eastern Europe, with families often connected to the region’s developing oil industry as well as scrap metal. With the arrival of these Jews fleeing the pogroms of Russia and Poland, an Orthodox synagogue, Ahavat Achim Hebrew Congregation, formed in 1907.

In the early twentieth century, Wichita’s Jewish community connected to a network of Jewish families in places such as Hutchinson, which for a while had its own synagogue, El Dorado and other, smaller communities. Both congregations had grown enough to allow for the construction of two synagogues, that of Hebrew Congregation in 1930 and of Congregation Emanu-El in 1932. According to the federal census of religious bodies, in 1936, there were 5,260 members of Jewish congregations in Kansas and 8 temples and synagogues. By contrast, Southern Baptists numbered 933 with 6 churches. As the community continued to grow, Jewish merchant families operated stores along Douglas Avenue while others operated scrap yards on the city’s northern edge. The Levand family took over the Wichita Beacon newspaper, making a visible presence in the face of a strong and vocal local Ku Klux Klan.

World War II changed Wichita and with it the Jewish community there. New families arrived from across the country, even across the world, to take advantage of new opportunities. In addition, many families faced the horror of relatives who perished in the Holocaust.

During the postwar years, Wichita’s Jews saw new levels of prosperity as businesses flourished and young families joined the ranks of the professions. As the 1950s transitioned into the 1960s, Jews became active in local Civil Rights activities.

In the late 1980’s, a number of families from the former Soviet Union added to the diversity of a population that continues to develop and change with the city. In more recent years, the Jewish community of Wichita has been undergoing considerable transformation. Major figures have aged and passed on while their children sought new opportunities elsewhere. Meanwhile, new professionals, especially doctors and academics, have arrived.

Throughout, the Mid-Kansas Jewish Federation (founded in 1935) and Jewish community remained, and remains a community partner in interfaith, cultural, and social justice issues in the community as a whole.