“I did not find the world desolate when I entered it. And as my parents planted for me before I was born, so do I plant for those who will come after me.” -Talmud

Your commitment to the Jewish community is evident in everything you do. Now you can extend your commitment into the future by making a planned gift through the MKJF’s Fund for the Future.

Your bequest or other planned gift through the Fund for the Future will keep our Wichita Jewish community strong for generations. It’s an expression of your trust in future community leaders. A way for you to be there whenever help is needed. It’s your sacred covenant with the Jewish people. Whether you use a will or other estate planning vehicle, your generosity can do a world of good.

Your legacy can reflect everything that is most important and meaningful to you. The legacy planning process can engender heartfelt conversations with your family and build bonds with your partners in the community.

The act of creating a legacy empowers you to complete the work of your heart, and to enjoy the peace that it brings. You are assured that your work will continue and the Jewish future will be bright.

Everyone has a unique family and financial situation. Your legacy gift of any size can be designed to match your personal circumstances. Options include:

For more information on “Creating a Jewish Legacy” through the MKJF’s Fund for the Future please contact the MKJF office at 316-686-4741.

THE JOAN S. BEREN - FOR THE LOVE OF ISRAEL FUND 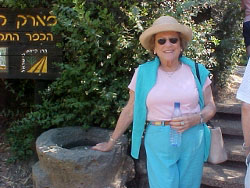 The board believes the Joan S. Beren – For the Love of Israel Fund is a fitting legacy and tribute to Joan who was a much admired philanthropist and supporter of the MKJF for over the last 60 years. Joan served as President of the MKJF from 1977 – 1979, and was a steadfast board member for many years.

The MKJF will allocate funds from Joan’s bequest to support missions to Israel for members of our Jewish community. While Joan was an advocate of the many programs supported by the MKJF over the years, she was especially interested that community members understood the central role the State of Israel plays in the identity of Judaism. Joan was always a very ardent supporter of Israel and she sponsored and led the first significant MKJF 10 day Mission to Israel in 2003, with 25 community participants. Through Joan’s generosity, the MKJF led a 2nd Mission to Israel in 2006, with 28 community participants. Joan believed in, and fully supported Israel missions because she knew they fostered closer ties for community participants with the people and land of Israel. We believe she would have wanted MKJF to continue to sponsor and encourage trips to Israel.

The Joan S. Beren – For the Love of Israel Fund will provide meaningful stipends to qualified recipients who desire to travel to Israel on missions whose strategic objectives are supported by, or in line with, the goals of the Jewish Federations of North America (JFNA). The MKJF is proud to support this new fund and encourages community members to start planning for many trips to Israel in the coming years to honor Joan.

The MKJF is pleased to announce its first allocation from The Joan S. Beren – For the Love of Israel Fund to the Wichita Jewish Community School which is being renamed the Joan S. Beren Jewish Community School. An allocation in the 2017 calendar year will be granted for a trip to Israel this summer for the school teachers and staff in conjunction with, and in honor of, the renaming of the religious school, and the introduction of the school’s new Jerusalem University partnership. Jamie Smartt, the School Director will be the group leader for this trip. We believe this gift is a fitting way to kick off this new Mission fund, since it wonderfully and appropriately combines Joan’s love of the religious community school and Israel missions. We just know Joan would have liked and whole heartedly supported this allocation.

Also, the MKJF is proud to announce its second and final allocation for the 2017 year from The Joan S. Beren – For the Love of Israel Fund to a group of Moms from the Wichita and Istanbul Jewish Communities to participate in a “Mom’s Birthright” trip to Israel this summer. Joan was first and foremost a mother of her Jewish children and prioritized Jewish continuity through her actions as a Mom. We believe Joan would have wanted to help support Moms in Wichita and around the world to instill Jewish values and aspirations in their children and families. As such, the MKJF will allocate funding to the Jewish Women’s Renaissance Project for this one of a kind, inspirational trip to Israel, and for local programming to support this group before and after the mission. Joan’s grandparents came from Lithuania and we believe Joan would be very heartened to know she was able to make possible Jewish continuity for Jewish communities in need wherever they may reside. Jamie Schmaltz will be the group leader for the trip. Starting in 2018, The Joan S. Beren – For the Love of Israel Fund will continue to allocate at least $10,000 per year, or at least $30,000 over a three year period, for Israel experiences for members of the Wichita Jewish community to be paid for from the Joan S. Beren bequest. (The terms for receiving funding for this year’s participants, and those in years to come, are available from the Mid-Kansas Jewish Federation.) The Mid-Kansas Jewish Federation will actively promote and publicize The Joan S. Beren – For the Love of Israel Fund and will to do its part to finance, sustain and foster a healthy Wichita Jewish Community School whose name will now bear Joan’s name.

We are very excited and grateful to have The Joan S. Beren – For the Love of Israel Fund – and supporting these meaningful trips and programs in her honor.